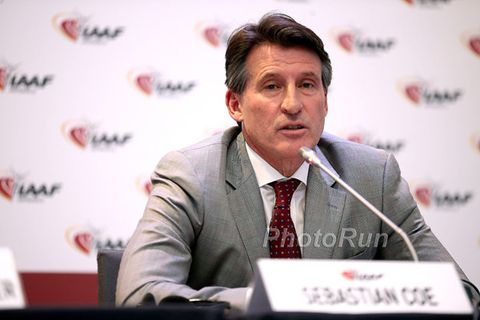 Sebastian Coe, who became the president of track and field’s world governing body in August, has given up his paid ambassador role with Nike. That news was one of several developments in recent days related to the organization that Coe heads, the International Association of Athletics Federations. Among others are an IAAF account of its record on catching blood dopers, a public defense of marathon world record holder Paula Radcliffe, and the provisional suspension of three top Kenyan officials.

Coe was affiliated with Nike for 38 years, through his days as a two-time Olympic 1500-meter champion and as chairman of the 2012 London Olympic organizing committee. Most recently, he was an advisor to Nike’s “Designed to Move” campaign. His contract with Nike was reported to be worth about $150,000 per year, although Coe hasn’t confirmed that amount.

The relationship drew increasing claims of conflict of interest. At an IAAF Council meeting on Thursday, Coe said about the paid position, “the current noise around it is not good for the IAAF and it is not good for Nike.” Coe said he decided to give up his Nike role earlier in November, but wanted to wait until the IAAF meeting to share the news with his IAAF colleagues.

Coe has denied allegations that his role with Nike influenced the IAAF’s awarding of the 2021 World Championships to Eugene, Oregon, without following the usual bidding process. The meet will be held at the University of Oregon, alma mater of Nike founder Phil Knight. Eugene was named the site of the 2021 championships in April, when Coe’s predecessor as IAAF president, Lamine Diack, held office. Diack is under investigation by Interpol on corruption charges.

Coe is scheduled to appear Wednesday before the Culture, Media and Sport Committee of the British Parliament, which will hold a hearing on blood doping in track and field.

In anticipation of the hearing, the IAAF rebutted charges that it tolerated widespread blood doping between 2001 and 2012. Those allegations were published last fall by the German television station ARD and the British newspaper the Sunday Times after the two news organizations obtained access to a database of blood-test results. Two sport science experts who examined the database told ARD and the Times that the test results are evidence of blood doping by some of the most successful runners of the period, and that the IAAF “idly sat by” despite the purported extensive cheating.

When the allegations were originally published, and again in Friday’s statement, the IAAF contended that the results found in the database are being misrepresented. Viewed in isolation, the IAAF said, individual test results don’t necessarily prove doping. Instead, the results help to establish baseline levels and patterns, and provide guidance on when urine testing for performance-enhancing drugs such as EPO is warranted, according to the IAAF.

As part of Friday’s statement, the IAAF cited marathon world record holder Radcliffe as an example of an innocent athlete unfairly charged with doping. Radcliffe appears with abnormal blood values in the test results database at least three times. She has said that extenuating factors, such as test samples being drawn immediately after she won the 2003 world half marathon championship and 2005 world marathon title, when she was severely dehydrated, skewed the results. The IAAF officially went on record as supporting those explanations.

In a statement, the IAAF Ethics Commission said the three were receiving 180-day suspensions “in the interests of the integrity of the sport.”

Specifically, the IAAF said it has information that the three may have been involved in covering up positive drug tests and diverting funds from Nike, which sponsors the Kenyan federation, for personal use.

In addition, Kiplagat is said to have received two automobiles from the Qatari federation. For more than a decade, Qatar has fielded global teams comprised largely of former Kenyans.

While suspended, the three are barred from playing any role with the Kenyan federation or the IAAF.

The World Anti-Doping Agency is scheduled to release a report by early January on allegations of corruption among IAAF officials.

On Thursday, the IAAF announced that the Russian federation had accepted full suspension, rather than contest the provisional suspension it received on November 9 for systematically encouraging doping.

The IAAF said that, by the end of the year, it will present the Russian federation with the criteria that will allow reinstatement. While the federation is suspended, Russian track and field athletes can’t compete in international events. It’s possible the suspension may still be in effect when the track and field competition at the 2016 Olympics begins on August 12.