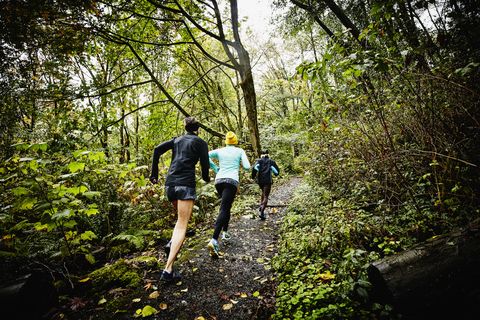 Once you’ve tackled a marathon, there are two ways to challenge yourself further: Increase your distance into ultramarathon territory, or make the same distance harder by changing up your terrain. Tackling a distance more than 26.2 can be intimidating to some people, but running a marathon on trails? That’s much more accessible, which is part of the reason trail running participation has increased by 26.4 percent over the past three years, according to research done by the Outdoor Foundation.

But running a marathon on the trail isn’t exactly the same thing as running one on the road. A trail run lets you step outside the pace/splits construct of a road race because your mile pace is dictated more by the terrain than anything else. And while there are pluses (like less impact on your body versus running on pavement and better scenery), a trail marathon also comes with unique elevation changes, different strength requirements, and less aid on the course.

Thinking about taking your marathoning off the road? Here’s what you need to know before you start racing trails.

What Does a Trail Marathon Training Plan Look Like?

Good news: You can use the exact same training plan as you would for a road marathon, with the caveat that your long run should definitely be on the trails, says Jes Woods, a Nike Run Club Coach in New York City and ultrarunner. “You should try and hit the trails as much as you can, but at least once a week,” she says. “And if you only have time for one, let it be the long run.”

Related Story
Training Plans to Help You Crush Your Goals

It’s the same philosophy as training on hills or a high incline on the tread for a hilly race course, or training on flat surface for a flat, fast race course. “You want to make sure you’re simulating the course that you’re going to race on to the best of your ability,” says Kris Mendoza, an ultramarathoner with Merrell and winner of the World’s Toughest Mudder in 2018. “That’s going to help your body adapt to the different stimulus, like the changes in elevation and the uneven terrain.”

Don’t Get Hung Up On Pace

Road runners tend to obsess over their pace, splits, and finishing time. But “the first piece of advice I would give someone training for a trail marathon is don’t worry about your pace, because every mile is created differently,” says Mendoza.

On a trail, one mile could cover a 2,000 foot elevation gain and the next could be totally flat; you can’t compare how long it takes you do each one. Instead of focusing on your splits, pay attention to your effort level.

“I try to train people to transition to time-based runs and training by perceived effort,” says Woods. “The terrain changes so much on trails and sometimes you're going to hit points where you can't run, and you’re just power hiking up, so you cannot not be stressing out, looking down at your watch, ‘What pace am I at?’”

Don’t be afraid to hike, either. “A lot of people moving from the road to trails have this mindset that you have to run everything, but sometimes running isn't the most efficient thing,” says Mendoza. “I've seen really good hikers hike faster than people trying to run up; they’re conserving energy for when they need it.”

How to Cross-Train for a Trail Marathon

Runners are...not great at cross-training. But making time for workouts besides running is crucial, especially for trail runners. On the road, running is a repetitive, forward motion; the uneven terrain of a trail, however, can pose serious stability challenges. “On a trail, you’re usually navigating rocks and roots and things on the ground, which works your legs in a way road running does not,” says Mendoza.

Because trail running calls for shorter, choppier steps that keep you light on your feet, it’s important to work on your foot and ankle strength and work on your lateral stabilizing muscles. “I like to do a lot of single-leg stability exercises, whether that’s single-leg deadlifts, bounding exercises or plyometrics where you’re jumping and landing on one foot, or balancing on one leg on one of those Bosu balls,” says Woods. “You need to get accustomed to activating and using those stabilizing muscles before race day.”

A strong core is also going to help keep you upright when you hit bumps on the trail. “Your body takes a different kind of impact on a trail than on a flat road, because you’re working so many more muscles that connect at different points of your body,” says Woods. Since your core is your center of power, it needs to be able to withstand the extra stress.

Make sure you’re including at least one day of strength training in your training plan, with just 10 minutes of core work.

Carry What You Need (and Take It With You)

When you’re out in the woods, you don’t have access to the same kind of amenities you might find on the road (think: kind spectators handing out orange slices or popsicle sticks with Vaseline).

“My rule of thumb on the trails is to prepare for the worst so the worst doesn’t happen,” says Woods. “I always wear a vest to carry essentials—plus a packet of Advil, a packet of Pepto, a Band-Aid.” Mendoza also recommends toilet paper for bathroom emergencies (“You really don’t want to use the wrong kind of leaf…”) and enough food to keep you fueled, since trail marathons typically run longer than road marathons.

Besides a good pair of shoes, these are a few of the things Woods and Mendoza won’t leave home without:

Unlike the chug and toss culture of road racing, trail running is all about leaving the trail better than you found it. So, during a race, you’re going to need to carry anything you might need with you—and take it back out with you. “Maybe you even pick up one piece of garbage that you see,” says Woods. “Just be respectful of the trails."

Ashley Mateo Ashley Mateo is a writer, editor, and UESCA-certified running coach who has contributed to Runner’s World, Bicycling, Women's Health, Health, Shape, Self, and more.
This content is created and maintained by a third party, and imported onto this page to help users provide their email addresses. You may be able to find more information about this and similar content at piano.io
Advertisement - Continue Reading Below
More From Half Marathon Training
Why Slowing Down Can Help You Get Faster (Really!)
Crave Speed? Reach for Brooks’s Hyperion Tempo
Advertisement - Continue Reading Below
Why the Half is the Perfect Race
What You Should Eat Before a Run
Ramp Up the Speed in the Lightweight Mach 3
Find Time to Train When It’s Best for You
40 Inspiring Quotes for Your Workout
Here’s When to Start Training for Spring Races
The Right Way to Carb-Load Before a Big Race
Find the Training Plan That’s Perfect for You