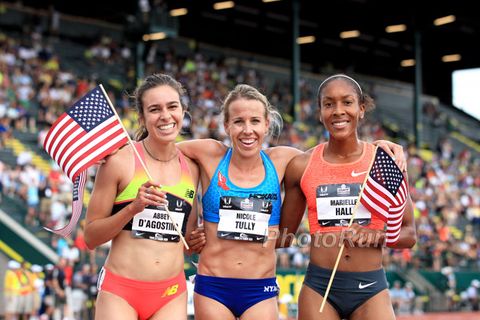 USA Track & Field did not require American team members to wear Nike-branded apparel at all times during the IAAF World Championships, according to runners who have sponsors other than Nike.

What Team USA members could wear in Beijing received a lot of pre-meet attention when six-time national 800-meter champion Nick Symmonds refused to sign USATF’s Statement of Conditions for the meet. Symmonds, whose primary sponsor is Brooks, contended the statement’s requirement that team members wear Nike-branded apparel at official team functions could be interpreted to mean the entirety of an athlete’s time in Beijing. Symmonds cited a letter sent to prospective team members that was meant to supplement the separate Statement of Conditions that read, in part, “Please pack ONLY Team USA, Nike or non-branded apparel.”

Because he didn’t sign the statement, Symmonds was left off the world team. He was replaced by Clayton Murphy, the fourth finisher at the U.S. championships in June.

After Murphy was named to the team, USATF Chief Public Affairs Officer Jill Geer told Runner’s World Newswire that the letter instructing athletes to pack only Nike or non-branded apparel was a mistake. Geer also said team members wouldn’t be required to wear Nike gear at all times.

Runners contacted by Newswire said they wore non-Nike apparel outside of competition.

“Since I've been over here, it really hasn't been a big deal,” Nicole Tully, who is sponsored by Hoka One One, said in an email. “On my easy runs and track workouts, I'm wearing whatever is comfortable,” Tully wrote two days before placing 13th in the 5,000-meter final.

Esther Erb, who placed 24th in the marathon, had similar experiences.

“I have simply worn whatever I have—a mixture of Nike USA gear and Skechers gear,” Erb wrote. “I have had zero pushback on it.”

Erb’s race was on the last day of competition, so she left for the pre-meet U.S. training camp in Tokyo later than most team members. As a result, she didn’t pack until USATF had clarified its guidelines soon before the championships started.

“A couple athletes have noticed that I had packed all my sponsored gear and were kind of wishing they brought theirs, too,” Erb said.

In protesting USATF’s Statement of Conditions, Symmonds said the federation has become increasingly aggressive in enforcing the apparel requirement, which has long been standard for U.S. athletes at global meets such as the Olympics and world championships. Symmonds said he was chastised by American officials at the 2014 world indoor meet when he wore Brooks apparel while drinking coffee in a hotel.

Newswire is unaware of any such incidents in Beijing.

“I have no idea what it's been like before this year, but it was not an issue whatsoever,” Erb said.

Despite the lack of pressure from USATF, Tully said she sometimes wore Nike-branded gear on her own time in Beijing.

“I tend to wear most of the USA clothing while hanging around the hotel or going to the practice facility, mostly because it's cool to be identified as a USA athlete and I like to represent my country,” she said.